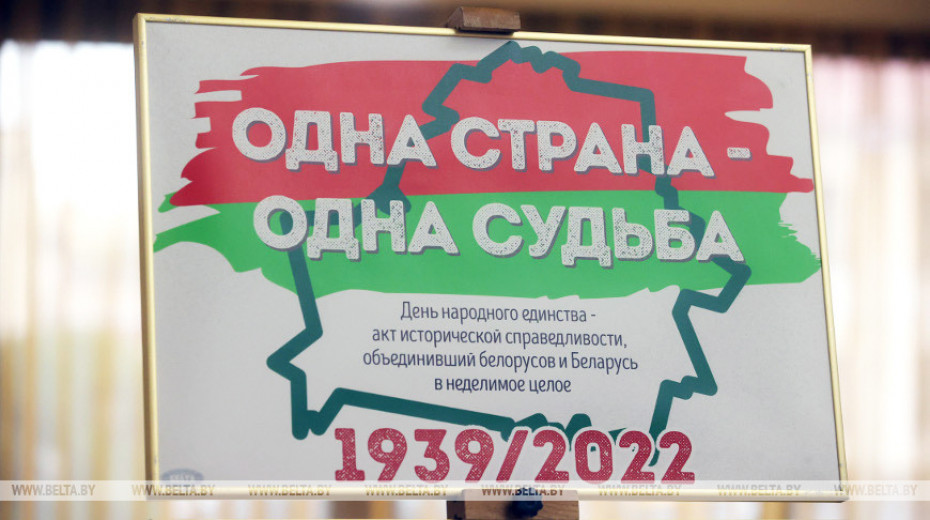 "These days Grodno, the whole of Belarus are discussing very important, fateful laws. These are the bills on the Belarusian People's Congress and the Electoral Code, which will be of great importance for the future of Belarus. But we remembered that it was during these November days in 1939 that no less fateful laws were adopted. Those were the documents on the reunification of Western and Eastern Belarus. We thought that it would be very symbolic to show this exhibition at a time when the country is discussing these important bills," said Vasily Matveyev, First Deputy Director General of BelTA.

On 2 November 1939, the Supreme Soviet of the USSR of the first convocation convened an extraordinary 5th session and granted the request of the People's Assembly of Western Belarus to include Western Belarus into the USSR and unite it with the Byelorussian SSR. The final legislative act was the law "On the incorporation of Western Belarus into the BSSR” adopted at the extraordinary session of the Supreme Soviet of the BSSR on 14 November 1939. Thus, the territorial integrity of the republic was restored and the Belarusian people were reunited.

The exhibition "One Country, One Destiny: 1939-2022" showcases both archival photos of the BelTA news agency and also the new pictures featuring the first Day of National Unity instituted by the presidential decree in 2021.

"BelTA's photos show the path that Belarus has passed to achieve national unity, the price our country paid. They also tell us why we must sacredly preserve our national unity today.

There are two thematic sections. Archival photographs give a glimpse of the plight of the Belarusians when the country was divided. One part was under the Polish occupation; it was a Polish colony in the fullest sense of the word: manufacturing was poorly developed, poverty was widespread, the Belarusian press, culture were non-existent. Therefore, the liberation march of the Red Army on 17 September 1939 was perceived by the locals with great enthusiasm. You can see it in the pictures,” Vasily Matveyev said.

Archival photos show gradual liberation of towns of Western Belarus from the Polish occupiers, local residents joyfully greeting the Red Army, people returning to ancestral homes and families reunited after being separated by the Soviet-Polish border. These photos also show how life gradually improved, how peasants were given land that was previously seized by the Polish lords. There are also unique shots from the People's Assembly of Western Belarus that adopted the declaration on the inclusion of Western Belarus into the BSSR.

“It is very symbolic that the archival photographs are displayed along with pictures of contemporary Belarusian cities. Today they do not differ from each other in the level of comfort, social and economic development. Grodno, Gomel, Minsk, Brest, and other Belarusian cities are well-developed, beautiful, modern cities that make us proud. This is not a raw material colony, which was Kresy Wschodnie [Eastern Borderlands] in 1939,” added Vasily Matveyev.

The exposition features bright, emotional images of patriotic runs, thematic exhibitions, the opening of monuments and the planting of Unity alleys. This is what the Year of People's Unity will be remembered for. BelTA journalists also made a special trip to Negoreloe to see what the station where the Soviet Union ended and the West began before 17 September 1939 was doing today. Together with the son of a prisoner of the Polish concentration camp Bereza Kartuska they once again visited the museum exposition of the red barracks where Poles destroyed the lives of thousands of Belarusians. They also paid a visit to the village of Edinstvo, where people of different confessions and ages live and honor the national unity as the greatest asset.

“We have shown that our strength is in unity. This is a great value that must be cherished. The legislative acts, which are being discussed in society today, will help us do that for the coming years. This is especially true about the Belarusian People's Congress, where all Belarus will be represented. The Belarusian People's Congress is a new form of democracy, which draws its traditions from what Belarusian remote ancestors called the veche. Innovations in the Electoral Code that are being discussed today are also important. We did our best to use this exhibition to draw parallels between the important initiatives of November 2022 and the fateful decisions of November 1939. This is all one country, one destiny of the united Belarus,” Vasily Matveyev said.

BelTA's photo exhibition “One Country, One Destiny: 1939-2022” will be on display at the Grodno Oblast Executive Committee through 14 November.

Region
Kochanova: Belarus-Russia Forum of Regions should be effective
All news