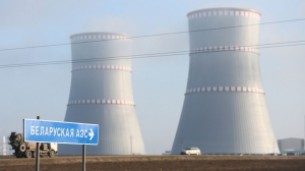 The first power-generating unit of the Belarusian nuclear power plant has successfully tested its safeguards, BelTA learned from representatives of ASE Company (the engineering division of the Russian state nuclear industry corporation Rosatom).

Integrated tests of technological safeguards represent one of the most important stages of the reactor unit’s hot trials phase. Automatic launch of all the four diesel generators of the emergency power supply system was tested as well as the automatic launch of one plant of the normal power supply system. The operability of emergency mechanisms of all the four safety channels was tested as well.

ASE Company Vice President and director of the Belarusian nuclear power plant construction project Vitaly Polyanin said: “The tests were a success. No remarks. They were completed on the first try. Success criteria as specified by the startup and commissioning work program have been reached. The tests have virtually finished the hot trials of the first unit. We just have to complete several tests as part of the draining of the primary circuit.”

The Belarusian nuclear power plant is being built near Ostrovets, Grodno Oblast using a Russian design featuring two VVER-1200 reactors with the total output capacity of 2,400MW. Rosatom’s engineering division – ASE Company – is the general contractor. The first unit is supposed to go online in 2020, with the second one scheduled for launch in 2021.

Region
Kochanova: Belarus-Russia Forum of Regions should be effective
All news