Lukashenko: New Constitution will guide Belarus through challenges and threats 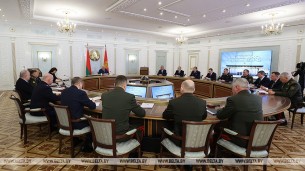 The provisions of the updated Constitution will help Belarus walk through challenges and threats to statehood, Belarusian President Aleksandr Lukashenko said at a meeting of the Security Council of Belarus on 8 February, BelTA has learned.

“We are approaching the logical conclusion of the constitutional reform process. It is very important that it was a bottom-up process starting in labor collectives, at dialogue platforms in the regions. Almost all the ideas and proposals that were discussed there made their way to the new Constitution draft. These proposals were studied, supplemented and finalized by the Constitutional Commission, the working group, professional lawyers and law experts, and were widely discussed by the public,” the president said.

He noted that the referendum, as a form of declaration of people's will, played a crucial role in the history of sovereign, independent Belarus three times.

“Today it is time to strengthen the fundamental law with provisions that will help Belarus get through new challenges and threats to our statehood. And no one in this hall and outside doubts that they will arise,” Aleksandr Lukashenko said.

According to him, new dangers will keep emerging all the time, and the recent events in Kazakhstan are a direct testimony to this. “To put it literally, this is another alarm signal for us, for Russia, and other countries of the post-Soviet space and beyond,” the Belarusian leader noted.