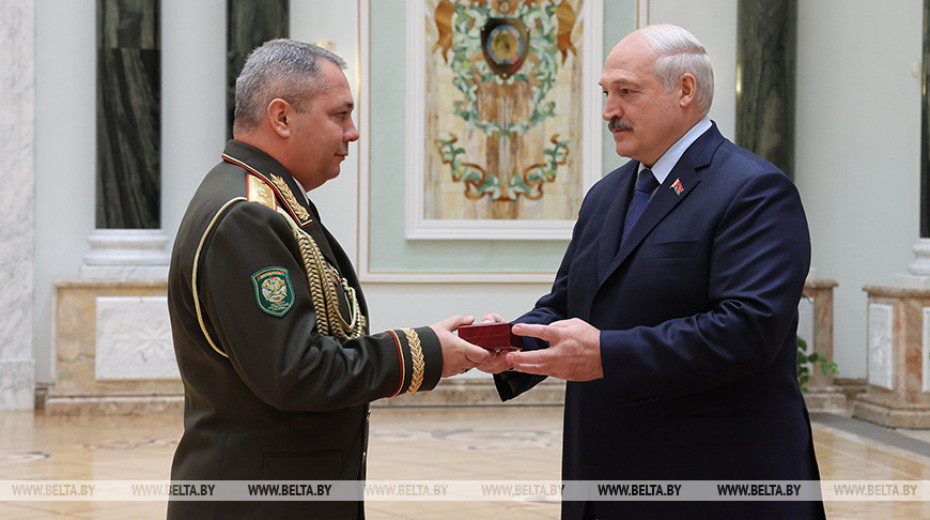 Belarusian President Aleksandr Lukashenko presented state awards on 13 September in the run-up to Day of People's Unity marked in Belarus on 17 September, BelTA has learned.

“We honor the Belarusians, who have reached, thanks to their talent and diligence, great success in manufacturing and creative activities, in serving their country and their people. In the Year of Historical Memory I believe it important to emphasize that 17 September has made its return to our national holiday calendar not only as a reminder of the value of freedom and independence but also as a tribute to the era that gave us, the Belarusians, the right to take our place on the world map,” the head of state said.

“We will remember it, as well as the fact that we established ourselves as a nation, a state, won the Great Patriotic War, revived the country from the ashes and even surpassed certain countries in the exploration of space, nuclear energy, biotechnology thanks to the people of labor. People who have always put the interests of the country above their own. People like you,” the Belarusian leader stressed.

Addressing the participants of the ceremony Aleksandr Lukashenko said that they had worked their way up to their deserved state awards - orders, medals, honorary titles - as it often happens in life, through ups and downs, through difficulties and obstacles, but always honestly and worthily. Everyone has their own life story behind them.

“All of you are united by one fate - the fate of our Belarus, the glorious chronicle of which we continue together,” the president said.

According to Aleksandr Lukashenko, each story deserves telling and words of gratitude. Unfortunately, not all of them can be told.

The head of state congratulated everyone on the forthcoming holiday – Day of People's Unity - and wished the honored awards and titles to become another step to new professional and creative victories in awardees' lives.

The Order of the Fatherland 3rd Class was awarded to Ambassador Extraordinary and Plenipotentiary of Belarus to Russia (2018-2022) Vladimir Semashko and Chairman of the Supreme Court Valentin Sukalo.

The Order for Service to the Homeland 3rd Class went to Sergei Zhilinsky, head of the Institute of Border Guard Service.

The Order of Honor was bestowed upon Director General of Mostovdrev Sergei Ososov, head of the Borisov shop of Belvtorchermet Nikolai Dakuko, foreman of the Vitebsk shop of Vitebskvtorchermet Yuri Roslyakov.

The medal for Saved Life was awarded to Bogdan Sheleg, a student of Mokrany secondary school, Malorita District.