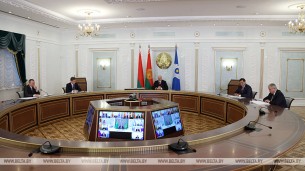 Belarusian President Aleksandr Lukashenko is taking part in a meeting of the CIS Heads of State Council. The event is held as a video conference under Belarus’ chairmanship, BelTA has learned.

The agenda of the meeting includes 11 issues. The CIS leaders are expected to exchange opinions on cooperation within the CIS and take a decision on the presidency in the CIS in 2022. Kazakhstan is expected to preside in the CIS next year.

The summit participants are set to adopt a statement on the occasion of the 30th anniversary of the Commonwealth of Independent States. Statements on cooperation in biological security and development of cooperation in migration have also been submitted for approval.

Two more documents related to cooperation in the field of security are to be signed. This is an agreement on combating money laundering, financing of terrorism and proliferation of weapons of mass destruction, as well as a decision to appoint the head of the CIS Anti-Terrorism Center. In addition, there are plans to approve an agreement on the formation of the Council of Presidents of Supreme (Higher) Courts and to declare the city of Comrat (Moldova) the CIS Capital of Culture in 2023.

As BelTA earlier reported, the CIS Ministerial Council met in person in Minsk on 14 October. The ministers of foreign affairs exchanged opinions on urgent international issues and the ways to deepen cooperation within the CIS. The situation near external borders was discussed in detail, with special attention paid to the situation in Central Asia. “The Belarusian side once again urged to learn the lesson from the events that took place not only in our country, but also in other states of the region, including in the post-Soviet space,” the Belarusian Minister of Foreign Affairs said.

According to him, the countries understand the importance of cohesion and interaction within the CIS for an effective response to common challenges and threats. “In this context, we have expressed our serious concern over the constantly expanding use of unlimited and illegal unilateral sanctions against the CIS countries from outside,” the minister said.