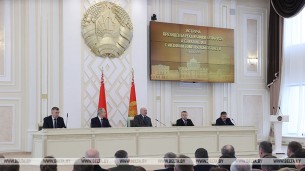 The head of state announced the upcoming meeting to discuss the situation in the region the day before when appointing the new governor. In particular, he said that Gomel Oblast will have to work hard to form a pool of human resources.

Agriculture is in focus. The region will have to think over crop rotations and to focus away from corn, although this crop is important for the region. "We need to try to cultivate some other crops here, starting from fruits, orchards, vegetables and ending with corn," the Belarusian leader stressed.

For their part, the government will try to help the region, including with the development of agricultural complexes. The task of local authorities is to clearly determine where and how to set them up, organize and select personnel, especially in the vicinity of agro-towns.

An important task in this regard is to provide fodder for animal husbandry, to exclude mismanagement. "We need to feed cattle, and to deal with the loss of livestock and cases of theft. We will also involve law enforcement agencies," the president said, when appointing Ivan Krupko.

"We need to sort things out in the region, to determine crop rotations, to engage industry and cities in the effort to develop agriculture. That will be your task. Once you make a decision, start implementing it immediately. Now it is like wartime. There is no place for red tape, bureaucracy," Aleksandr Lukashenko set the task.

As for the industry, the head of state suggested that the governor team up with Deputy Prime Minister Yuri Nazarov, who is the authorized representative of the President of Belarus in Gomel Oblast: "Build your team. Yuri Nazarov will lend a helping hand. He is a down-to-earth person, easily reachable. He took on any issues and solved them. I think it will be a good support for you, especially in terms of industry matters."